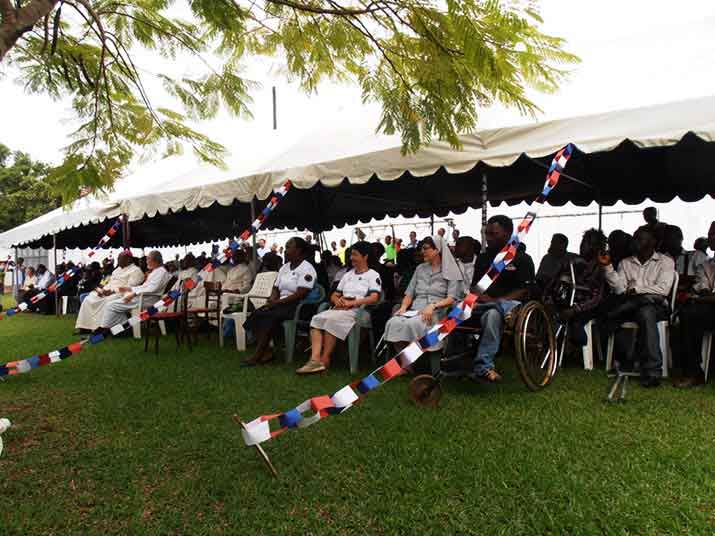 Posted at 17:32h in Sisters Hospitallers by admin 0 Comments

It was December 26th when the first community of Sisters Hospitallers was settled in Virginia, an outer area of Monrovia, Liberia. Four women, four sisters, brought the seed of hospitality to that fertile land that soon embraced them. They were Sr. María Jesús Núñez (R.I.P.), Sr. Carmen Lasa, Sr. Consuelo Zazpe and Sr. Clotilde Elvira who, sheltering orphans and abandoned children, embodied those words from that our founder María Josefa Recio said to the first sisters then, and now to all of us, “be charitable with them… and be like real mothers for them”.

50 years of service, 50 years of hospitality, 50 years in which the happiness that sprouts from walking with the last ones can be inhaled in every corner of our community in Liberia.

It´s been 50 years walking with impoverished but hopeful people, in a place where diseases and wars haven´t been able to beat life. Today we look back with grateful eyes because it´s our past, our History, what encourages us to walk, to keep on announcing that God´s Kingdom  has come, that a different world is possible.

December 8th was the day. The community house and the health center at Pipeline were stiffed up to celebrate the Golden Jubilee. From early in the morning, it was a day to express gratitude for the dedication of so many sisters, collaborators and volunteers who have made possible the task of the Hospitallers in Liberia. And of course, it was a day to remember all those children and patients who were and are the focus point of the hospitaller mission. They are, as Saint Benedict Menni reminds us, the living images of Jesus.

The Mass was celebrated together by the Archbishop of Monrovia, Rev. Lewis Ziegler, the Bishops from the two closest dioceses and the Apostolic Nuncio, H. E. Miroslaw Adamczyk. Many Liberian priests and religious communities, along with staff and the local Parish community joined the sisters to celebrate that day. Many boys and girls who stayed at the center, now adults, didn´t want to miss the celebration, either.

The General Government was represented by Sr. Ana Lucía Castro, third General Counsellor, and from the Provincial Government came Sr. Begoña Pérez and the Provincial Secretary Sr. Ana María Oroz. Sr. Lourdes Sanz, representative of the Provincial for Africa, came from Foso, Ghana. From Spain, along with Sr. Monserrat Esparza and Mikel Tellaeche, Superior and CEO of the Aita Menni Hospital, five volunteers came, all of them members of the We Are Like You project that helps the Saint Benedict Menni Center in Monrovia. 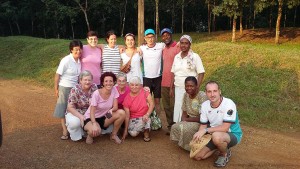 Volunteers from Aita Menni, with Sisters Hospitallers from Liberia, Spain and England

Words of gratitude from the Archbishop touched more than one. The Mass became a happy party where the gathering of a huge family was celebrated with african songs.

After the speeches from representatives of civil and religious bodies, the fun part started. The children who stayed at the Center years ago sang a Spanish song learned from the sisters, and it was very moving. The current staff from the Health Center sang a song as well, and the Spanish volunteers played a small act where the establishment of the Order was related. A local musician, Emanda B., dedicated a song to Sisters Hospitallers, and a soccer match with the Liberian Amputee Team served as final event of a day full of strong feelings. 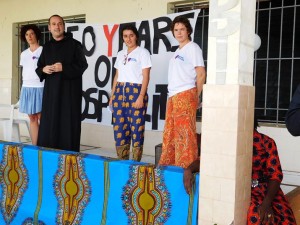 Theater play on the establishment of Sisters Hospitallers 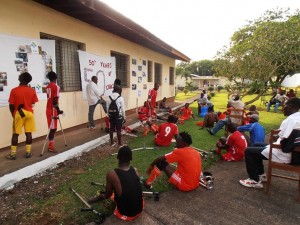 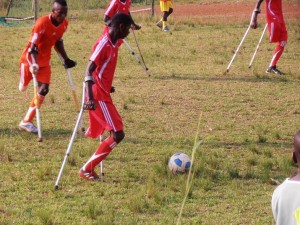 The community in Liberia keeps on walking and welcoming. Keeps on dreaming on new projects for the Liberian people. There were four the first to come in 1966; 50 years later, in 2016, it´s Sr. Florence Adevor, Sr. Inca González and Sr. Colette Banka who keep the hospitality doors opened. Let´s stay, we the Hospitaller family, “united all in heart”, as Sr. María Angustias Giménez said.

On December 10th, a pilgrimage to Virginia, organized by the Diocese of Monrovia set the end to the events of the 50th anniversary of the arrival of Sisters Hospitallers to Liberia.