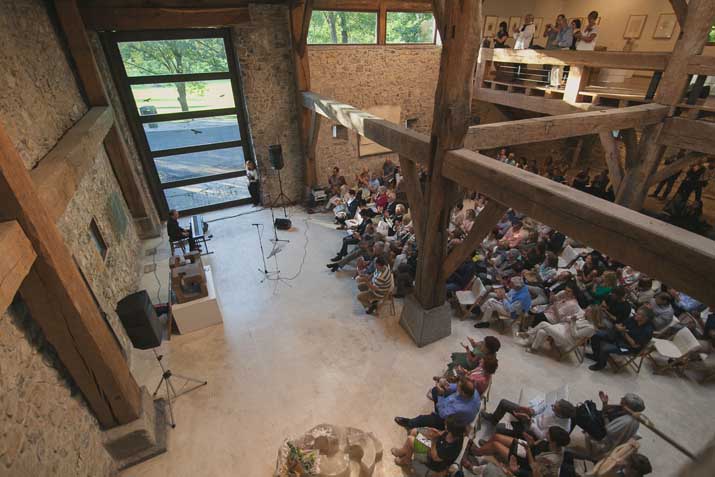 On the fifth of this month, workers from the different Aita Menni centers, volunteers, company representatives and partner institutions and, in general, friends of the Hospital enjoyed a party in honor of charity and harmony, organized by the Management in an emblematic and special environment: the Chillida-Leku museum, which has been closed to the public for the last 5 years.

In total, more than 300 people associated with Aita Menni came to Hernani. In the morning and afternoon, they were able to participate in the varied program schedule, getting to know more about the reality of Liberia, contributing to the “We Are Like You” project and, of course, viewing the works of the San Sebastián sculptor, located in the countryside of Chillida-Leku, as well as the exhibition housed by the sixteenth century Zabalaga Manor.

The day, aimed at the ‘big family’ of Aita Menni, benefitted from the involvement of another big family, that of Eduardo Chillida, who put the entire premises at our disposal, including the villa, which exhibits the paintings of Eduardo Chillida junior and that has been closed even while the museum was open to the public.

Sightseeing tours and much more

In order to get to know the work of Chillida, four very busy guided tours were organized at different times. But the event, which was a great success in terms of participation, included much more: kids playground, a dance workshop, artistic creation of a mural, African percussion by volunteers from Senegal and Mozambique, a braid shop, flea market and charity concert, among other events.

Liberia was very present during the organized activities. The event, as well as making for a playful and relaxed meeting place outside the work environment, was focused on conveying the need to facilitate the implementation of the “We Are Like You” charity project of the Sisters Hospitallers in Monrovia. Therefore, among the guests was Sister Begoña Pérez, head of the English Province of the Sisters Hospitallers (of which Liberia is a part), and Sister Inca González, assigned to the Benedict Menni Centre in Monrovia since 1992. For the same reason, also in attendance, on behalf of the Provincial Council of Gipuzkoa, was not only the head of the Dependent Adult Care Department, Arritxu Manterola, but also the director of International Cooperation, Fernando San Martín.

In addition, other well-known personalities made the rounds of Chillida-Leku throughout the evening, such as the President of Red Cross Euskadi, Ignacio Irusta, the Bishop of San Sebastián, José Ignacio Munilla, and the president of the Aquarium of San Sebastián, Vicente Zaragüeta.

At the grave of Eduardo Chillida and his wife, Pilar Belzunce, as the highlight of the day, Aita Menni wanted to show, once again, its gratitude for the generosity of the Chillida family, represented by their son, Edward, and their daughter, Susana Alvarez and one of their grandchildren, Mikel Chillida. After the aurresku of honor, the mother superior of the Community of Sisters Hospitallers in Arrasate, Sister Montserrat Esparza, laid down some flowers. The day ended with a lunch provided by Ausolan.

But first, the musician and composer Juan Carlos Irizar, director of the Aita Menni Hospital patient choir, performed the seventh of his charity concerts. The Oñati musician was accompanied on this occasion by the magnificent voice of soloists Julián Torres and Inaki Revuelta, who delighted the audience with a select repertoire.

For mental health in Liberia

The Sisters Hospitallers Congregation of the Sacred Heart of Jesus, to which the Aita Menni Hospital belongs, is dedicated to helping people with health needs, especially in the field of mental illness. It has centers in Europe, India, South America, Africa and Asia. The “We Are Like You” project aims to use the experience of our center in caring for people with mental illness to launch a psychiatric care service in Liberia. This service, according to Sister Inca Gonzalez, is now even more necessary after the precarious situation in which the population has been left following the Ebola epidemic.

The word ‘thanks’ is not enough

Eduardo Chillida’s desire to share his work led him to create the Chillida-Leku Museum in the Zabalaga Manor. Aita Menni’s desire to help more and more people with mental illness has led the center to organize this event, in which not only the Board gave its all, but also a good part of the staff.

The word “thank you” was insufficient to convey gratitude to the individuals and institutions that, like Juan Carlos Irizar, Iñaki Revuelta or Julián Torres, Mikelson or Música Invisible, participated in the holding of the event. A special mention goes to the managing director, Mikel Tellaeche, as promoter of the event; Egoitz Zabala, who acted as master of ceremonies; Selene Vélez, occupational therapist of HAM and dancer in the Debla Danza group that organized the dance workshop; Ainhoa ​​Altuna, employee at the Intellectual Disability and Mental and Behavioral Disorder Unit (UDITRAC), graduate in Fine Arts who led the construction of the mural, and Itziar Aizpurua, who liven up the charity concerts of Juan Carlos Irizar, an artist who not only gave the concert, but also composed a piece entitled “Comb of the Winds”, whose score was handed over to the Chillida family. The event would not have been complete without the generous collaboration of Macarena Aspiunza, Lucía Escolar, Fuensanta Mesa, Amaia Jauregi, Gabriela Álvarez, Irene Álvarez, Ilona Kowalska, Jaione Gartziaetxabe, Xabier Altuna, Aitor Armaolea, Aloña Telleria, María Hermoso and many other people who in one way or another were with us on this unique day. 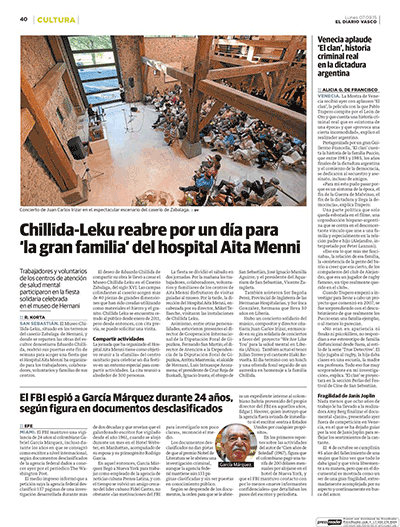