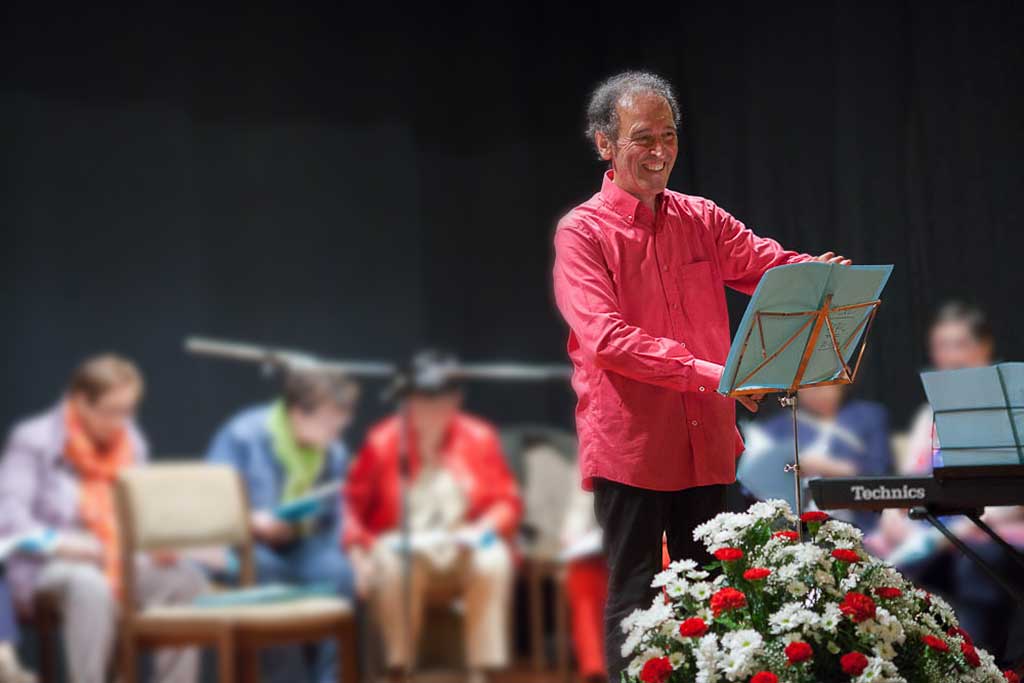 Juan Carlos irizar, a good friend of We Are Like You, at a performance in Aita Menni Hospital.

The hospitaller family of Aita Menni and Saint Benedict Menni Mental Health Center of Monrovia is today in mourning for the death, yesterday, of one of the first benefactors of our We Are Like You project, Juan Carlos Irizar.

Juan Carlos, who left us at the age of 69, dedicated his life to music as a composer, performer and conductor of choirs and orchestras. The musician from Oñati was the conductor of the patients’ choir of the Aita Menni Hospital, and he felt a very special bond with our We Are Like You project for women with mental illness in Liberia. Irizar was also the composer of the “Hymn to St. Benedict Menni,” which the Sisters Hospitallers sing at many of the Congregation’s celebrations in Spain.

The 2014 Ebola epidemic in Liberia and the death of several brothers of St. John of God and members of the staff of Saint Joseph Catholic Hospital had a deep impact on him, and led him to compose several pieces inspired by these events, which he would later collect in an album entitled “We Are Like You”.

Juan Carlos wanted to put his musical talent at the service of our charitable cause, and in 2015 he launched a concert tour through various locations in the Basque Country in order to raise funds for our mental health initiative in Monrovia.

Irizar gave a dozen recitals in several villages in the Basque Country, concerts that he himself was in charge of organizing in detail. In each place he accompanied local or nearby choirs on the piano and, in some cases, singers and other musicians. “It is gratifying to see that so many people are giving their collaboration for free”, said the musician at the time. The performances were accompanied by an explanation of the “We Are Like You” initiative, which at that time was taking its first steps.

In Autumn of that same year he launched a second solidarity concert tour.

In 2016, our benefactor and friend embarked on a new series of performances to raise funds for our project, coinciding with the release of a new album, entitled “Bihotzeko izarrak – Stars of the heart”.

The news of the death of the musician from Oñati has caused deep sorrow in the music world of the Basque Country, where Juan Carlos was well known and appreciated.

Musically trained in San Sebastian, Madrid, Pau and Rome, he leaves for posterity more than 30 albums of instrumental music and countless compositions for theater, film and television, orchestras and bands. He was the author of the hymns of Basque towns such as Berriz, Galdakao, Mendaro, Eskoriatza, Zestoa, Zegama, Orozko, and compositions for the San Sebastian Film Festival and celebrations in favor of the Basque language such as Kilometroak or Ibilaldia..

Juan Carlos was titular organist in his native town, Oñati, and developed a fruitful career as an orchestra conductor, carrying the baton of formations such as the Liceo Symphony Orchestra of Barcelona, the Orchestra of the Conservatory of Pau, the Orchestra of the Academy of Santa Cecilia in Rome, the Schola Cantorum choir of Donostia, the Zaletasuna choir of Galdakao, or the music bands of Vitoria-Gasteiz, Zestoa, Getaria and Galdakao, among others.